Many project practitioners expel significant effort in dealing with the sociopolitical complexity of project work. The concept of sensemaking can help us understand this complexity. Sensemaking is the process by which we derive the story, or make sense of a situation, based on various cues (Weick et al., 2005). The project environment, like all organisational environments, is replete with various sources of information (cues), and the possible interpretations of these cues is potentially as numerous as the number of stakeholders receiving the information. Much of the project manager‘s day can be spent trying to bring the various stakeholders, including project teams, project boards and other influential groups and individuals into alignment in terms of making sense of these cues and driving effort in the required direction (van der Hoorn & Whitty, 2017a). Given the potential cognitive benefits of visuals (see Chapter 2), it is unsurprising that visuals are commonly seen as a tool to support sensemaking, which often leads to decision-making in project work (see, for example, Ewenstein & Whyte, 2009; van der Hoorn & Whitty, 2017b).

Appreciating the process of sensemaking, and its importance in project work, is foundational to the development of effective visuals. Visuals, when appreciated through the sensemaking lens, have the purpose of assisting stakeholders to make sense of information to derive a story (or picture) of a particular facet of the project. Preparing effective visuals therefore relies on both understanding who will consume the information – and their preferences and priorities – and also understanding the various pieces of data and how they relate (see Chapter 6).

The origins of the research on visuals in project management is found in the concept of boundary objects. Boundary objects are abstract or concrete artefacts – for example, plans and models in construction work, a project schedule, stakeholder matrix, or a list of project requirements – that meet the informational needs of various social worlds, and they are often visual in nature (van der Hoorn, 2020). Researchers have found that boundary objects can support negotiation (Alin et al., 2013; Di Marco et al., 2012), facilitate collaboration (Barrett & Oborn, 2010) and conflict resolution (Iorio & Taylor, 2014). Whilst boundary objects are commonly characterised as being ‘stable’ (unchanging), some researchers note that the very adaptability and potential evolution of such objects can help to move forward conversations and evolve knowledge in the project context: the visuals have agency (Comi & Whyte, 2018; Ewenstein & Whyte, 2009; Whyte, 2008). 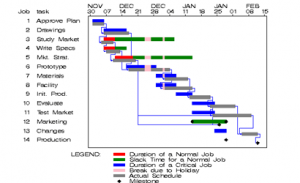 There is now increasing recognition that our connection of the Gantt chart with project management is problematic. The Gantt chart presents project work as being predictable and linear, as if it were ‘operational’ (Robles, 2018). This has the tendency to set unrealistic stakeholder expectations regarding the way the work will unfold and can be managed.

Research studies find that some project managers are aware of this conundrum and recognise that its worth is not necessarily in managing the work, but rather as a tool for helping build the confidence of stakeholders, or to meet their expectations of what project management entails (Whitty, 2010).

Even though project managers may feel frustration that they are expected, or perhaps even forced to use Gantt charts, they also manipulate this situation to their advantage and use Gantt charts to placate senior management and clients (or use high-level versions of a Gantt chart, for example, Archetype 4). As one project manager expressed, ‘It’s the Gantt charts that keeps my manager out of my office so I can get on with my work’ (Whitty, 2010).

This does not mean that visuals don’t have a place in scheduling and managing completion of activities within an initiative. Quite the opposite. Agile methodologies use Kanban-style boards as a central coordinating and tracking device to manage the team’s workflow, in the short to medium term. When used, for example, as part of the Scrum methodology, they are a visual tool that forms part of a broader system for holding team members accountable. For those interested in this style of work coordination there are several software options available including: 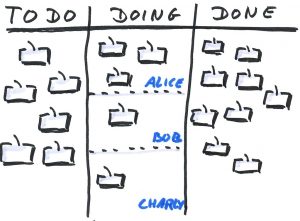 To summarise, when creating visuals we are deliberately or inadvertently communicating messages about a situation or choice through our design choices. For the Gantt chart, the neat lines, running from left to right in parallel rows down the page infer structure and order. It’s no wonder the Gantt chart is seen as a tool to build stakeholder confidence, even if it doesn’t directly enable project managers run their projects, and perhaps bends the truth of how the project will actually unfold. In the case of the Kanban board, attention is drawn to whether tasks on the board are moving at the expected rate, as agreed between members of the project team. As we will explore further in Chapter 5, visual language is powerful, and we need to be careful about the subtle inferences that can result from our visualisations.

Research on the use of visuals in management is still in its infancy (Beynon-Davies & Lederman, 2015; Davison, 2015; Goransson & Fagerholm, 2017; Maire & Liarte, 2018). However, there are an increasing number of studies that discuss the benefits of visuals in project work. The first discussed here is an example of a contemporary project management tool, the project-space model, that is used to support sensemaking on project status. The second example explores the use of visualised dashboards and maps in project portfolio management (PPM).

Discussing status with the project-space model

Note: A higher resolution file of the project-space model is also available.

Findings of an action research study of a large in-flight project revealed that the project-space model supported strategic and integrated sensemaking of project status at project board meetings (van der Hoorn, 2016a; van der Hoorn & Whitty, 2017b). Prior to the introduction of the project-space model the board had used traditional dashboard reporting and other text-based reports to discuss project status at its board meeting. Following use of the project-space model, project board members and the project manager reported that they felt better able to discuss the most pertinent factors influencing status in an integrated manner (van der Hoorn, 2016a). Through the scaled icons representing enablers, constraints, opportunities and threats the most influential cues were given attention during board discussions.

To summarise, in moving beyond traditional text-based reports and leveraging the design opportunities that visuals present, the project manager felt better able to communicate the project’s status and the project board perceived that their collective sensemaking capabilities were enhanced.

The PMI and UCL research project aimed to answer the question: ‘how to use and design visuals to support cognition of data in portfolio decisions?’ (Geraldi & Arlt, 2015). The study was executed with 204 student participants who were asked to make PPM decisions using various dashboards. The dashboards had varying degrees of incorporation of the principles that the researchers hypothesised would support PPM decision-making: (1) interactivity, (2) purposefulness, and (3) truthfulness, efficiency and aesthetic (refer to Figure 3.2).

A specific example of a visual in project portfolio decision-making with established benefit is the visual project map (Killen, 2022). A key strength of this visual is the representation of dependencies between projects. The ability to identify dependencies is central to portfolio decision-making and the visual project map exemplifies the benefits that visual representation can provide compared to narratives (or even tables). The visual project map is particularly useful in enabling decisionmakers to see the connections between initiatives and how the decision to include a project within a portfolio needs to be undertaken with reference to the other initiatives upon which it depends and for which its deliverables are a pre-requisite (Killen, 2022).

3.4 The project managers’ and executives’ perspective on visuals

In interviewing executives with experience in project work, van der Hoorn (2020) reveals that these key stakeholders are subject to a variety of dispositions or conditions that make visuals a useful tool to support their sensemaking and subsequent decision-making. For example, many executives reported that they may be required to provide direction/decisions for a project that is not within their primary area of expertise. As such, visuals can support them to understand new concepts and ideas with speed. Similarly, the majority of executives comment that they are under continuous time pressure in an environment of information overload, and they require information presented in a way that enables them to reach decisions quickly. Interviewed executives also reported benefits in the way that visuals supported them to onward communicate key messages relating to the project. Having a visual to take to a meeting with their senior colleagues or external stakeholders enabled them to more accurately share the story that needed to be communicated.

This study highlights that whilst many executives will be disposed to appreciating visuals, many project managers feel ill-equipped or unsupported to communicate using visuals.

Benefits of visuals in project work

3.1 Concept exploration Kanban board by O.Tacke used under CC0 licence.

Cartoon: designed by Samara Hoffmann licensed under a CC-BY-NC-SA licence.

Visuals for influence: in project management and beyond by University of Southern Queensland is licensed under a Creative Commons Attribution-NonCommercial-ShareAlike 4.0 International License, except where otherwise noted.