At the end of this chapter you should be able to answer the following questions:

An Independent T-test or Independent Samples T-test is an important test for Between Groups differences.

Keep in mind that we are examining two groups of individuals – In this example, we are looking at metropolitan versus regional Australians. The dependent or outcome variable is mental distress.

And here we have the output from the T-test. 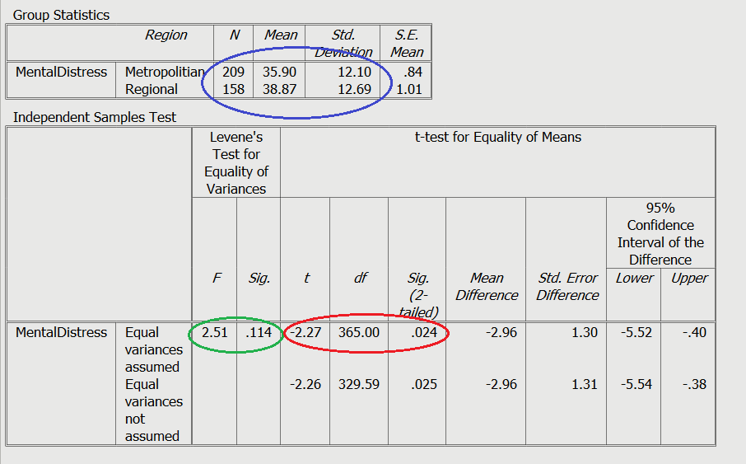 Green: The first thing you should examine is Levene’s test. If this test is nonsignificant, that means you have homogeneity of variance between the two groups on the dependent or outcome variable. If Levene’s test is significant, this means that the two groups did not show homogeneity of variance on the dependent or outcome variable.  In our example, Levene’s test is nonsignificant so we can move on to the statistics for the tests under the condition of equal variances assumed.

Red: The next thing you should look at is the t value, the degrees of freedom, and the p value statistics in the first or top row of the output. The p-value of .024 shows that there is a significant difference in levels of mental distress reported by metropolitan and regional Australians. If we look at the mean scores, we can tell that regional Australians reported higher levels of mental distress (38.867) than the Australians who live in major cities (35.904).

You will also notice that there is a 95% CI presented, which is a 95% Confidence Interval of the difference.  This CI has a lower limit at -5.525 and an upper limit at -.401.  Because the CI does not include 0 we can infer that the difference between the two groups does exist in the population.

Blue: Next, make sure you have a look at the mean, standard deviation, and sample size (N) for both groups.  You can get the effect size (Cohen’s D) by using an effect size calculator.

You may find an effect size calculator here: https://www.socscistatistics.com/effectsize/default3.aspx

If you enter the mean, standard deviation, and sample size for both groups, you should get a Cohen’s D of .239.

You will need to report the Means and SD for each group, along with the t test statistic (t), its p value, and its effect size d.

It is common in many formats to round your decimal places to two.  Therefore, a Write-Up for an Independent T-test should look like this: