Mediation models focus on two effects – the direct effect and the indirect effect – and these can be combined into a measure of the model’s total effect.

Effects in a Simple Mediation Model

There are a number of assumptions that should be met before performing a mediation analysis.

The advent of affordable personal computers with statistical software has prompted researchers to develop new tools for analyses. Jamovi provides a number of free modules for more advanced analyses, including the MedMod Macro for meditation and moderation. Another tool for mediation analyses is the PROCESS Macro, which is available as a free extension for SPSS.

The following slide provides information on MedMod by illustrating where it appears in the Jamovi menu, and by showing menu option:

The linked slides provide an example of mediation output: 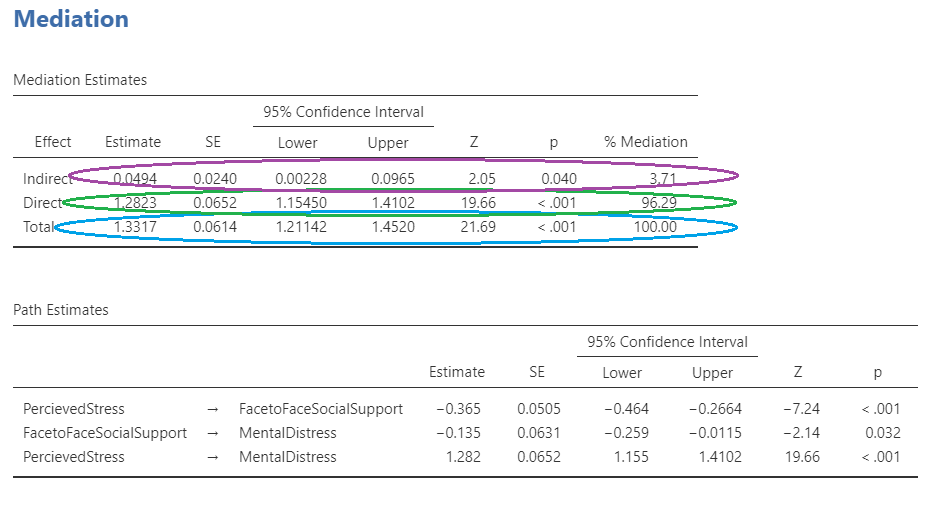 This mediation output results can be written up as follows:

A mediation analysiswas conducted to examine the mediating effect of social support on perceived stress and mental distress. The total effect of the model was found to be significant, b=1.33, z=21.69, BCa CI [1.21, 1.45], p<.001. It was found that there was a statistically significant direct effect, b=1.28, z=19.66, BCa CI [1.15, 1.41], p<.001. A statistically significant indirect effect was also found, b=0.05, z= 2.05, p=.040. These results suggest that social support partially mediated the relationship between perceived stress and mental distress