Hierarchical regression is a type of regression model in which the predictors are entered in blocks. Each block represents one step (or model). The order (or which predictor goes into which block) to enter predictors into the model is decided by the researcher, but should always be based on theory.

The first block entered into a hierarchical regression can include “control variables,” which are variables that we want to hold constant. In a sense, researchers want to account for the variability of the control variables by removing it before analysing the relationship between the predictors and the outcome.

For this example, please click on the link for Chapter Five – Hierarchical Regression below. You will find 4 slides that we will be referring to for the rest of this section.

For this test, the statistical program used was Jamovi, which is freely available to use. The first two slides show the steps to get produce the results. The third slide shows the output with any highlighting. You might want to think about what you have already learned, to see if you can work out the important elements of this output.

Slide 2 shows the overall model statistics. The first model, with only age and gender, can be seen circled in red. This model is obviously significant. The second model (circled in green) includes age, gender, and perceived stress. As you can see, the F statistic is larger for the second model. However, does this mean it is significantly larger? 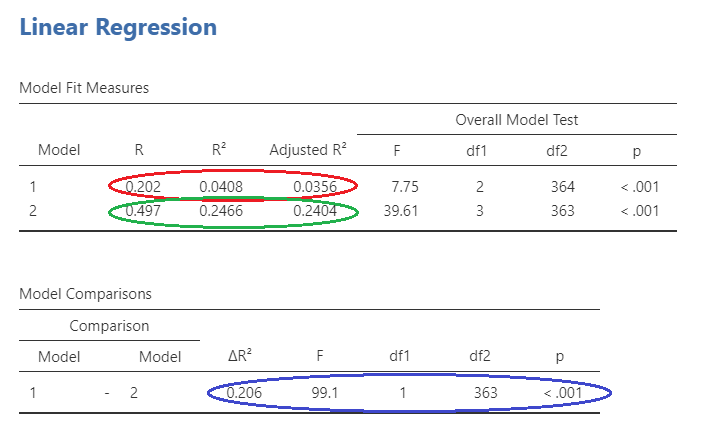 An example write up of a hierarchal regression analysis is seen below:

In order to test the predictions, a hierarchical multiple regression was conducted, with two blocks of variables. The first block included age and gender (0 = male, 1 = female) as the predictors, with difficulties in physical illness as the dependant variable. In block two, levels of perceived stress was also included as the predictor variable, with difficulties in perceived stress as the dependant variable.