Skip to content
We’re having to find out own resources and the best one we found was through the Department of Health! These resources are like little diamonds. But they’re not readily accessible. How can educators access these if they don’t know that they’re there? Can you help us with similar shareable resources for multicultural early years education? 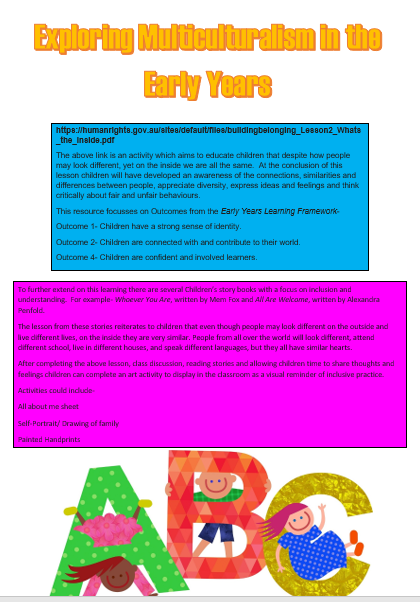 The lesson plan and corresponding picture books were developed to be used in an early years classroom, aimed at helping children develop an awareness of the similarities of people despite their differences and how to appreciate diversity and recognise fair and unfair behaviours. The lesson plan, ‘What’s on the inside?’ is a part of an educational toolkit called Building Belonging: A toolkit for early childhood educators on cultural diversity and responding to prejudice (2016) developed by the Australian Human Rights Commission, which is an independent organisation established through federal parliament to protect and promote human rights both in Australia and internationally.

Australia is a multicultural society and students from many different cultures and nationalities are to be found in early childhood classrooms. Teachers play an important role in educating children about cultural acceptance and contrasting the biased messages that many may have seen in society. When students and their teachers engage in open discussions, they explore ideas, learn from each other and children’s thinking expands and works towards bringing about change (USQ, 2020). The differences amongst a group of people because of their ethnic backgrounds, traditions, and language is referred to as cultural diversity. Language is an extremely important part of a child’s culture and should be respected and celebrated. Many students whose culture and first language are different from that in the school environment may encounter functional difficulties using language to communicate various wants and needs (Saracho, 2017).

Hidden Treasures by Katie Walsh is licensed under a Creative Commons Attribution-NonCommercial-ShareAlike 4.0 International License, except where otherwise noted.