Skip to content
At the least, I need words in different languages to comfort children when they’re upset or for toilet training. Can someone make a resource with simple, useful phrases that we could use with children? 85% of our children are Vietnamese but resources in any of Australia’s community languages would be great! 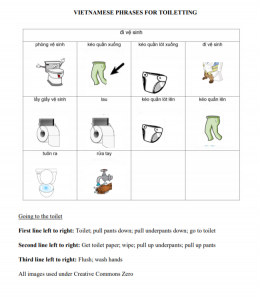 This resource is to be used to assist children from a Vietnamese-speaking background while using the toilet. While the educator assists toileting the child, they can refer to the picture prompts that are accompanied with written prompts in the child’s first language. Some children may not be able to read the written prompts, so in this case it may be beneficial for their parents, if possible, to translate the pictures initially for the children.

It is beneficial to provide children who have English as an additional language or dialect [EAL/D] with authentic contexts for communicating through spoken and written language. Skinner (1957, as cited in Sigelman, Rider, & De George-Walker, 2013) theorised that language is learnt through the association of a stimulus (such as a picture) with a response or spoken word. Furthermore, Vygotsky (1978, as cited in Sigelman et. al., 2013) posited that children develop their language through social interaction in what he called ‘talking to learn’. Therefore, when educators commentate their actions and talk through what they are doing with children, this forms the basis for language acquisition for EAL/D children (Durgunoglu & Goldenberg, 2011). Halliday (1975, as cited in Durgunoglu & Goldenberg, 2011) stated that the first step of language acquisition is engaging with the immediate environment. EAL/D children develop second language much like a young child developing his/her first language, for example, pointing to and naming objects (Durgunoglu & Goldenberg, 2011).

The resource additionally captures aspects of the Early Years Learning Framework for Australia (Department of Education, Employment and Workplace Relations, 2009). The following outcomes are met:
Outcome 1: Children have a strong sense of identity
• Children feel safe, secure, and supported
• Children develop their emerging autonomy, inter-dependence, resilience and sense of agency
• Children develop knowledgeable and confident self identities
• Children learn to interact in relation to others with care, empathy and respect
Outcome 2: Children are connected with and contribute to their world:
• Children develop a sense of belonging to groups and communities and an understanding of reciprocal rights and responsibilities necessary for active participation
Outcome 3: Children have a strong sense of wellbeing
• Children become strong in their social and emotional wellbeing
Outcome 5: Children are effective communicators
• Children interact verbally and non-verbally with others for a range of purposes
• Children engage with a range of texts and gain meaning from these texts

Gems and nuggets by Delena Kendall is licensed under a Creative Commons Attribution-NonCommercial-NoDerivatives 4.0 International License, except where otherwise noted.