Skip to content
We’re having to find our own resources and the best one we found was through the Department of Health! These resources are like little diamonds. But they’re not readily accessible. How can educators access these if they don’t know that they’re there? Can you help us with shareable resources for multicultural early years education?

All my friends and me

The above link is a resource that supports multicultural early years education, and is suitable for children aged three to six years. The link will take you to a suggested learning activity that gives children the chance to explore their differences and similarities in a small group environment. They will explore how being different to other people does not mean that you cannot be friends, instead it gives you the chance to learn new things.

The learning aims and objectives of this activity are to allow children to openly express feelings and present ideas and work, respond to ideas and suggestions from others, become aware of connections, similarities and differences between people and begin to develop a strong sense of who they are and their shared identity living in a multicultural Australia. The word ‘multiculturalism’ is introduced and explained during the learning activity and how it relates to the children in the book highlighting things such as clothing, food and physical attributes. Emphasis is placed on how there are lots of different people in Australia and the world but also many things that make us the same.

Organisation for the activity is group time on a large mat area with the educator reading the eBook All my friends and me (Australian Human Rights Commission [AHRC], 2016a) to the children, and elaborating on themes in the text such as similarities and differences between characters and activities undertaken. This is to then prompt a discussion regarding those in the group, regarding similarities and differences. For example: ‘Are we all the same colour, or are we all different? Wait for responses and discuss the children’s ideas and feelings. Discuss how in some ways we all look different – skin tone, hair colour, eye colour, but we have similarities, such as fingers and toes, eyes to see with and noses to smell with’. Children will then be able to record these on an ‘All About Me’ sheet, along with a coloured drawing of themselves which they can present to the group if confident. Depending on writing ability, educators may need to assist with this. 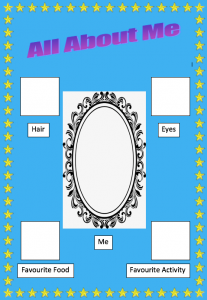 The resource also contains further suggested activities to support multicultural education and links to helpful resources such as the Colours of Australia Song which can be access via the following link: https://humanrights.gov.au/about/news/videos/colours-australia-song

This book and associated group activity is aimed at early years education as it is about a pre-school age child noticing the similarities between his/her peers but also the different multicultural aspects. This is a positive and strengths based approach to introducing the concept of multiculturalism to this age group as it focuses on similarities not differences. Interacting with this text is built upon by conducting a group activity where children find and celebrate similarities and differences between themselves and their peers.

The eBook, ‘All My Friends and Me’, by The Australian Human Rights Commission (AHRC, 2016a) is an appropriate response to the above educators’ concern as it highlights that educators can explore enacted frameworks and guideline organisation websites to find quality resources. The AHRC is part of the global United Nations, that authored The Convention on the Rights of the Child (1989), by which all early years educational frameworks and policies are underpinned. Article 2 of the Convention states: ‘The Convention applies to everyone whatever their race, religion, abilities, whatever they think or say, whatever type of family they come from’, and is specifically concerned with respecting multiculturalism. This eBook is from a toolkit of early education resources called Building belonging: A toolkit for early childhood educators on cultural diversity and responding to prejudice (AHRC, 2016a), which focuses on encouraging respect for cultural diversity and tackling racial prejudice in early childhood settings.

This activity links to The Early Years Learning Framework (Department of Education, Employment & Workplace Relations (DEEWR), 2009), through its Respect for diversity principle, Cultural competence practice and Learning Outcomes 1 and 5: Outcome 1 Children have a strong sense of identity –  Children learn to interact in relation to others with care, empathy and respect; Outcome 5 Children are effective communicators – Children engage with a range of texts and gain meaning from these texts. Cultural competence involves fostering an understanding of how each person’s culture shapes their values, behaviour, beliefs and basic assumptions. This means recognising that everyone is shaped by their cultural background and it inevitably influences how we interpret the world around us, perceive ourselves and relate to other people (AHRC, 2016c). The above activity also links to the Queensland Kindergarten Learning Guideline (QCAA, 2018b), through its Learning and Development areas of Connectedness: Building positive relationships; Showing respect for diversity; Exploring literacy in personally meaningful ways.

Gems and nuggets by Georgia Butler is licensed under a Creative Commons Attribution-NonCommercial-NoDerivatives 4.0 International License, except where otherwise noted.